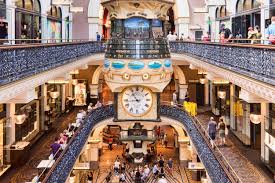 Originally home to many convicts and marines during the 18th century, it has transformed into one of Sydney’s most busiest and vibrant streets that is packed with shopping stores and restaurants.

Stretching 3 kilometres in length, spend a whole day shopping literally until you drop.

Undoubtedly one of the most popular and recognisable shopping precincts in Sydney, this one block long mall hosts many flagship chain stores and more than 400 specialty stores. It links four main shopping centres and arcades including Westfield, Strand Arcade, Mid City Centre and Stockland Glasshouse. Once you start shopping, it's very hard to stop!

Home to a large number of popular department stores such as David Jones and Myers, it is the largest by area designated just for shopping time. Opened in late 2010 and visited by 43.8 million annually, it is home to 353 retailers including high end brands such as Chanel and Calvin Klein.

Next up is the Strand Arcade which has opened since 1891, is the last remaining Victorian era arcade in the Sydney CBD. Visited by 5.4 million people annually and home to 76 retailers including local designer boutiques, its traditional atmosphere is perfect to experience historic Sydney while fitting in some shopping.

Head a bit down George Street and explore Queen Victoria building. A century building designed by architect George McRae, it's romanesque style building remains one of Sydney’s most iconic buildings. Listed as one of Australia’s heritage sites in 2010, the building houses 180 finest fashion boutiques, jewellery shops and homewares. It features two well known mechanical clocks which contains dioramas and moving figures that change by the season. Make sure you take that instagram worthy shot while you enjoy roaming within the traditional buildings. Popular eateries such as Zumbo Patisserie and Haigh's Chocolate is perfect for a pit stop during your shopping spree.